Our core Values. Our Beliefs.

The Scriptures of the Old and the New Testaments as the written Word of God and the only rule and norm of faith and of practice.
All the Symbolical Books of the Evangelical Lutheran Church as a true and unadulterated statement and exposition of the Word of God, to wit: the three Ecumenical Creeds (the Apostles’ Creed, the Nicene Creed, the Athanasian Creed), the Unaltered Augsburg Confession, the Apology of the Augsburg Confession, the Smalcald Articles, the Large Catechism of Luther, the Small Catechism of Luther, and the Formula of Concord.

Mount Olive Lutheran Church, a congregation of The Lutheran Church-Missouri Synod, exists to provide opportunities for worshiping the Triune God, for growing in the Christian faith, for helping one another, for bringing others to know Christ, and for serving others in our vocations. (adopted May 2000)

Mount Olive communes, administers the Sacrament of the Altar, to the communicant members of Mount Olive Lutheran Church. Members of our sister congregations may also participate with us. It is best to notify the pastor before communing.

If a person is visiting and is not a communicant member, we request that you do not commune. If you are interested in communicant membership at Mount Olive Lutheran Church, please arrange a time to visit with the pastor. 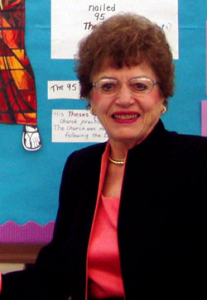 Mount Olive Lutheran Church is a daughter congregation of Trinity Lutheran Church at 537 Grand Avenue, Billings, Montana. The first worship service was held at the Trinity Lutheran School at 2802 Belvedere Drive, Billings, Montana on February 22, 1959. Reverend H.A. Wood was the first pastor and the first organist was Lois Wroge Fehrmann. Ground breaking for the new church was in April 1960. Dedication service for the new building was in September 1961.

In early February, 1959, 34 communicants and their families were granted a peaceful release from Trinity Lutheran Church to begin a mission church in west Billings. On February 22, 1959, the new congregation of Mount Olive held its’ first service at Trinity Lutheran School, which was also on the “frontier” of 1959 Billings. Soon a Pastor was called and a new organ donated.

This did not occur without some reservation and concern.

By early 1960, it was clear that a larger space was needed for worship services. A building committee was established, plans made, ground broken and soon the first phase of the new Mount Olive was in place on a few acres across from West High School at the corner of 24th Street and St. Johns. The location was identified by a consultant as an ideal location and provided enough room for future expansion. This first phase was essentially the current fellowship hall and the first floor of the current education wing.

Within 5 years, Mount Olive’s congregation had a baptized membership of over 500 and a Sunday School with over 250 kids. By 1967, the congregation was self-sufficient and the Montana District removed its subsidy of the congregation.

From 1974 through 1978, numerous discussions surrounded the need for additional space for the growing congregation but failed to get enough support to pursue. By 1979, the congregation agreed that it had outgrown the original facility. After many meetings and prayerful consideration, a decision was made to add a new sanctuary and additional areas to support the growing congregational needs. Construction began in 1981 and culminated in May of 1982 with the addition of the current sanctuary and the second story of the education wing. A choir loft was added a year later and the office area was finished by spring of 1983.

In 1981, Trinity Lutheran School outgrew its building and moved preschool and kindergarten to Mount Olive. By 1983, Mount Olive was home to 1st and 2nd grade also. This was a result of the Lutheran Interparish Education Association established in 1977, to foster cooperation in developing Lutheran education in Billings

During this busy time of the early 1980s, Mount Olive also provided the support to start a mission congregation of its own in the Billings Heights (Our Savior), by calling a second Pastor for the mission start and eventually having 20 Mount Olive families serve as the nucleus of this new congregation.

None of the decisions associated with the growth of Mount Olive came easy and, in fact, proved extremely difficult for some. But viewing the history of Mount Olive and its growth provides the benefit of perspective on the road traveled.