FTP based backup of a Mount Olive website comprises the movement of website information from the IONOS/Mount Olive server machine to the FTP server machine on the FTP complex local network. This movement is managed on the IONOS side by a plugin installed in the website’s WordPress base. Currently, this plugin is BackWPup, which supports not only FTP backup, but also the Amazon S3 protocol for storing data blobs in a cloud. An FTP server runs on the FTP Server machine in the FTP Complex, which accepts data from the BackWPup plugin and stores it on server machine local disks.

FTP is a ancient protocol that was designed before firewalls became common. Consequently, it has features that require uncommon configuration of both the backup plugin that runs on the IONOS machine and the FTP server. Specifically, the firewall component of the router does not allow traffic coming from the internet through unless one of two conditions apply: 1) a local machine sends packets to a machine outside the local network using an internet address and specific port. The firewall notices this and allows replies from the process using the internet address and port to travel through it. There is also a way to “open” a port on the firewall. Traffic from an internet machine to this port is forwarded to a specific machine on the local network for processing. In the case where FTP traffic from the backup plugin is forwarded to the FTP server, the port used by the backup plugin must be open in order for data to transit the router/firewall and reach the FTP server.

FTP uses two ports during an FTP session. The first port is used for command traffic (identified here as the command channel) and the second for data traffic. In order for FTP packets to transit the firewall and reach the FTP server, both ports must be open on the firewall. The command port is generally fixed in value and used by the plugin to contact the ftp server to start a session. The standard value of the FTP command port is 21. However, it is common for hacker bots to probe this port looking for vulnerabilities in firewall and local network configuration. Consequently, it is good security practice to use a non-standard value for this port to discourage such penetration attempts. This has an effect on how the client (in this case the plugin) is configured (see below).

Using active mode causes problems. In particular, in the case of communications between the FTP server and the IONOS server, the IONOS machine may itself be behind a firewall (not shown in Figure 1). The plugin chooses a random port that is unlikely to be open on the IONOS firewall. Therefore, when the server attempts to open the data connection (from its source port of 20 to the random destination port on the IONOS machine), the IONOS firewall (which sits in front of the IONOS machine, which, in this case, the plugin is acting as the client) doesn’t allow the connection through, since it has not opened the random port specified by the plugin.

Therefore, using passive mode is necessary for FTP transfers between the FTP server and the plugin. The server can limit the value of its data port to a small range that the FTP complex firewall keeps open for FTP transfers. It then chooses a value in this range and communicates it to the client, which it then uses as the destination port to open a connection to the FTP server.

When passive mode is chosen, the ftp server sends to the client its address so the client can open a connection to it using one of the ports in appropriate range. (FTP allows the server IP address used for data connectinos to be different than the address used for the command channel. This supports transfer of data to a different machine used to control the FTP transfer.) However, the FTP server is assigned a local network CIDR address that is not routable over the internet. Consequently, it must send to the client the internet address of the router, which will then forward the data packets to the FTP server using its local address. Since the FTP server doesn’t know a priori what the internet address of the router is, this address must be specified in the FTP server configuration file.

Scheduling backups by the plugin

The backup plugin enables WordPress admins to define jobs that trigger backup activity. Each job is defined using a set of configuration panes, one of which is a schedule for when to run the job. Figure 2 shows a typical schedule pane. 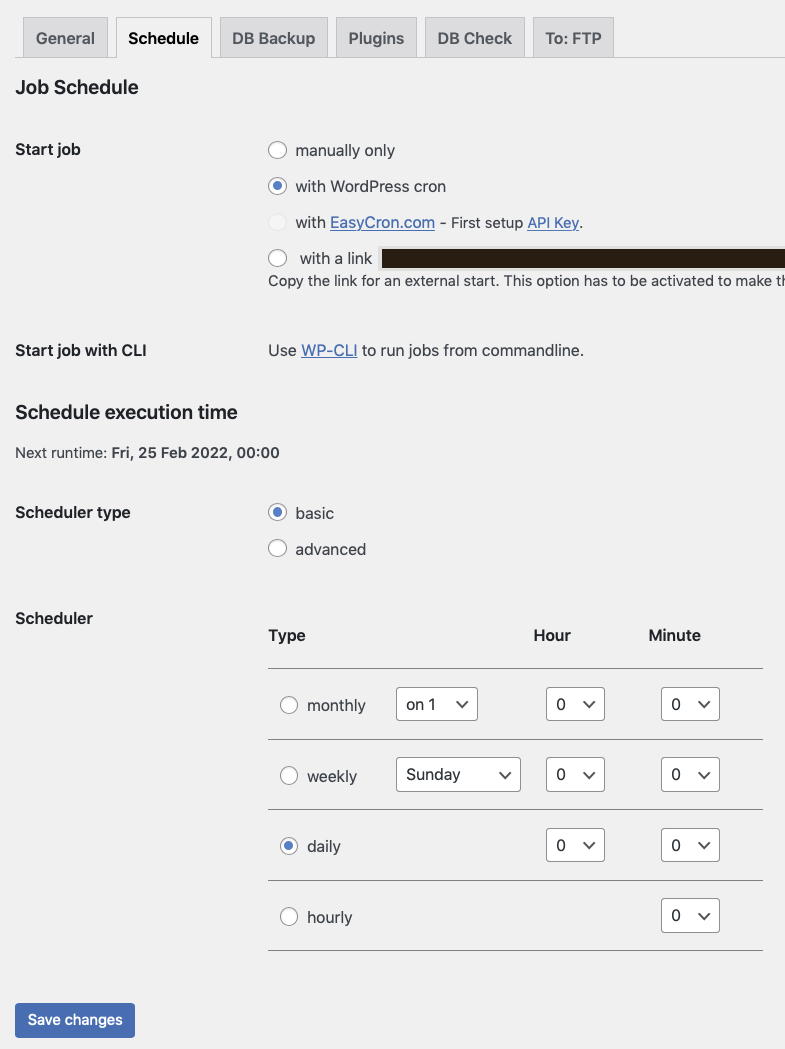 The first set of items in this pane specifies the specific scheduler to use to trigger the backup activity. Three choices are presented: 1) manual scheduling (i.e., the admin must trigger the job manually), 2) using the WordPress cron facility to schedule the job (under this choice is the option to use EasyCron.com, a paid for scheduling service), and 3) using a URL link that an external scheduler can reference to start the job.

IONOS server configuration is managed thorough the IONOS Mount Olive account. IONOS provides a configuration application under this account that allows its customers to manage various aspects of its behavior using a web browser. After logging into the account, the admin is presented with a web page displaying several choices for configuring the account. One of these is the “Hosting” choice. Clicking on this option takes the admin to a page that specifies several categories of configuration, including “Webspace”, “SFTP & SSH”, “Databases”, among others. At the bottom of the page is a list of “More features” and the first service listed is “Cron Job Manager”. Clicking on this text displays a page that allows the admin to create new cron jobs and also to modify existing cron jobs. Note that these jobs are not managed by the WordPress cron scheduler. Rather they are managed by the underlying operating system cron facility. Therefore, these jobs run whether or not WordPress is triggered by an HTTP request.

Accessing the “Cron Job Manager” page displays all currently defined jobs as well as a button near the top right corner of the page that allows admins to create new cron jobs. Cron job configuration allows an admin to specify an HTTP URL that is referenced when the job runs as well as scheduling data. A typical specification of scheduling data is shown in Figure 3.

The precision of scheduling of an IONOS cron job is significantly less that that provided by the WordPress cron scheduler. In particular, after defining the day on which the job should run, the only time options available are: 1) Morning, 2) Afternoon, 3) Evening, and 4) Night. These comprise 6-hour periods during which the cron scheduler may run the job.

To use the IONOS cron scheduler, the backup plugin scheduling option denoted as “with a link” is used (see Figure 2). A URL is supplied for this option that when referenced runs the backup job. The IONOS cron job specifies this URL as one of its configuration options. When the IONOS cron job runs, it references this URL (using an HTTP GET operation), which triggers the WordPress cron scheduler and which then runs the WordPress cron job.

(Note: this problem will only occur if the FTP server is inside the Mount Olive IT network. Currently, this is not a problem. This section is simply a placeholder in case the problem arises. If so, a solution will be documented.)